ORDERS MAY BE DELAYED DUE TO EFFECTS OF HURRICANE IAN

One of the biggest questions in camper van design is whether or not to install a shower inside your van.  Some people simply can’t live without an inside shower, while others are perfectly happy showering outside, at the gym or at campgrounds.

On the flip side, the problem with NOT having a shower inside the van is that it can be inconvenient to take outdoor showers when in the city or when it’s cold outside.  It can also sometimes be a hassle to find a gym or campground nearby that you can take a shower at.

The best “compromise” solution we have found is the Tetravan Shower System which is a collapsible shower that folds away when not in use.  It provides all the benefits of having a shower inside your van without any of the space and floor plan limitations usually associated with an interior shower.   In addition to the shower itself, a really well made folding shower curtain that works seamlessly with the shower is also available.

Vanlife Outfitters has been selling the Tetravan shower for quite some time and our customers have been very happy with the product – so much so that we are installing this into one of our demo vans.  In this video, we go over the product benefits and how it works.  We also plan to do a video on how it’s installed at some point in the near future. 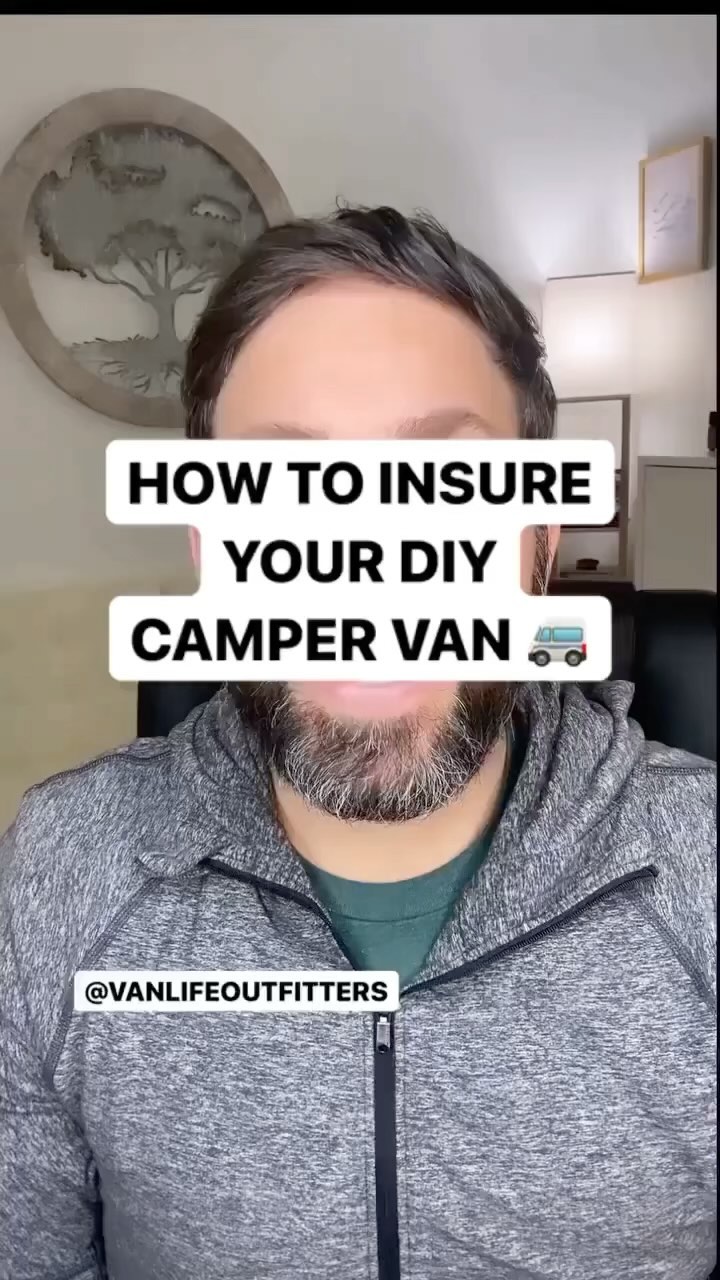 vanlifeoutfitters
•
Follow
REMINDER- Insure your home on wheels! 🚐 Insurance now available in CA, UT, AZ, CO, ID, IN, IL, OK, OH, MN, WI, OR, GA, and TN 🚐 You’ve spent a lot of time and money building out your dream home on wheels; it’s only natural that you want to make sure all of that time and money wasn’t wasted should anything happen to your van along the way.🚐 Insuring your home on wheels in essential. Yet, finding an insurance company for your self-built camper van can be challenging. Which is why we did the research for you! We wrote a blog post that goes over the entire process on how to insure your self-built camper van! Check out the link in our bio 📲 Follow @vanlifeoutfitters for more vanlife tips and products. • • • • • • #4wd #4x4 #4x4offroad #offroad #offroading #ontheroad #overland #overlandbound #overlanding #overlandlife #sprintervan #vanlife #vanlifeexplorers #vanlifeisawesome #vanlifejournal #buslife
View on Instagram |
1/6 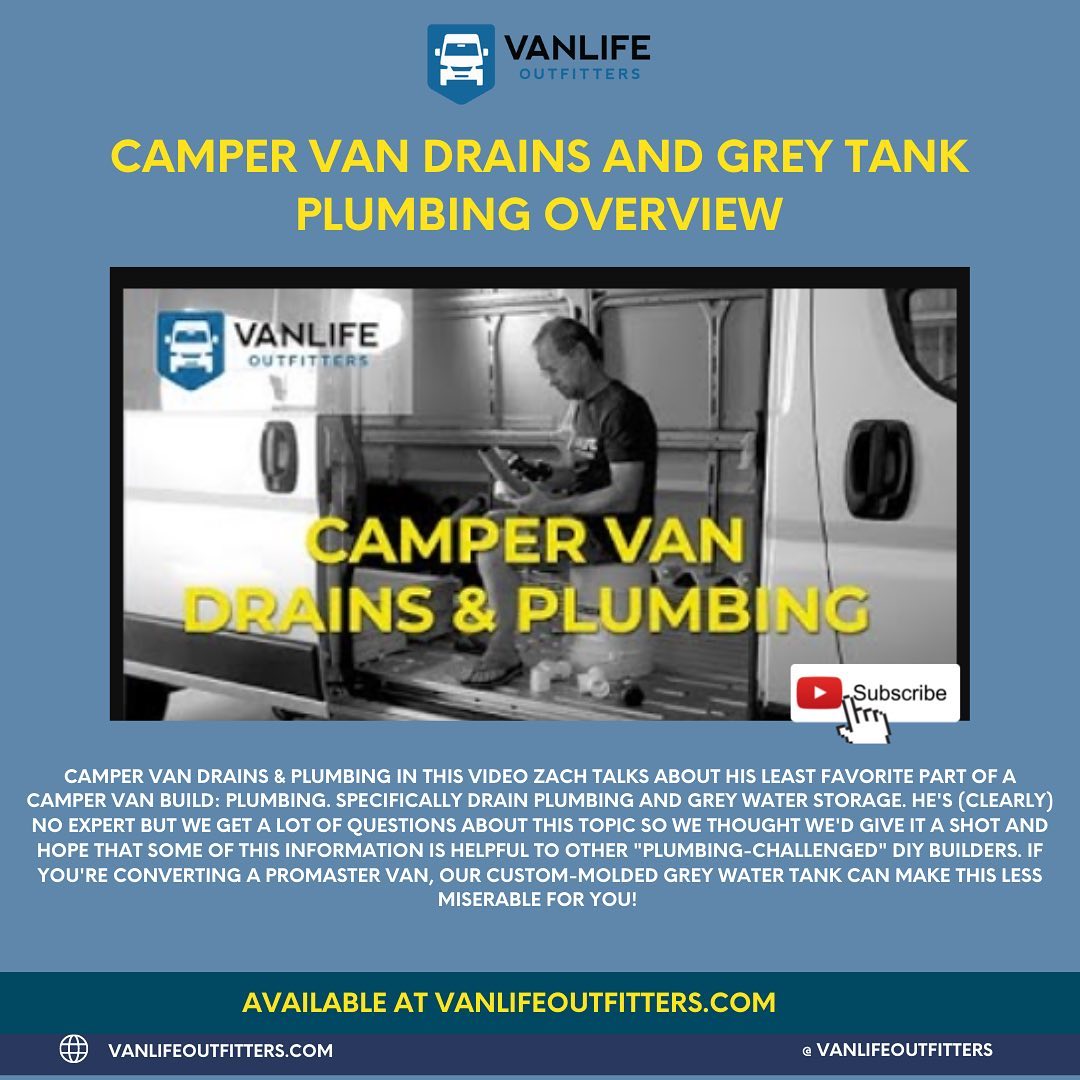 vanlifeoutfitters
•
Follow
In this video Zach talks about his least favorite part of a camper van build: plumbing. Specifically drain plumbing and grey water storage. He's (clearly) no expert but we get a lot of questions about this topic so we thought we'd give it a shot and hope that some of this information is helpful to other "plumbing-challenged" DIY builders. If you're converting a Promaster van, our custom-molded grey water tank can make this less miserable for you! Watch Full Video on Youtube. Link in Bio! 📲 Follow👉 @vanlifeoutfitters 👈 for daily tips, inspiration, and all things Vanlife. Visit the link in our bio for essential and exclusive vanlife products including electric, insulation, flooring, cooling, and so much more. Link in bio. 🚐💨 To get features, use #Vanlifeoutfitters or tag us @vanlifeoutfitters 📲 • • - #vanlife #vanlifetravel #vanlifeexplorers #vanlifemotivation #vanlifediaries #vanlifers #vanlifeideas #vanlifemovement #homeonwheels #motorhome #vanlifer #homeiswhereyouparkit #buslife #campervan #vanlifestyle #rvliving #rvlifestyle #vanconversion #camperlifestyle #vanlifeing #vandwelling #vandweller #hippievan #vangoals #theprojectvanlife #vanvibes #vanliving #diycamper #projectvanlife
View on Instagram |
3/6 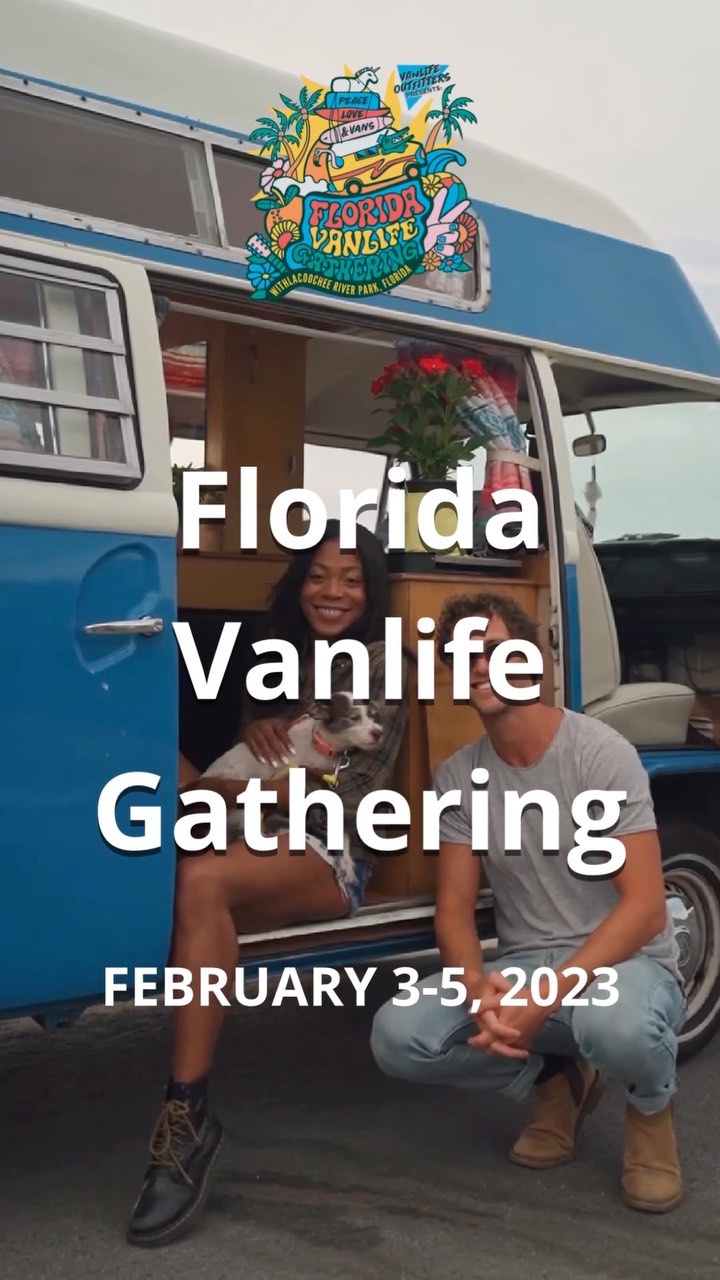 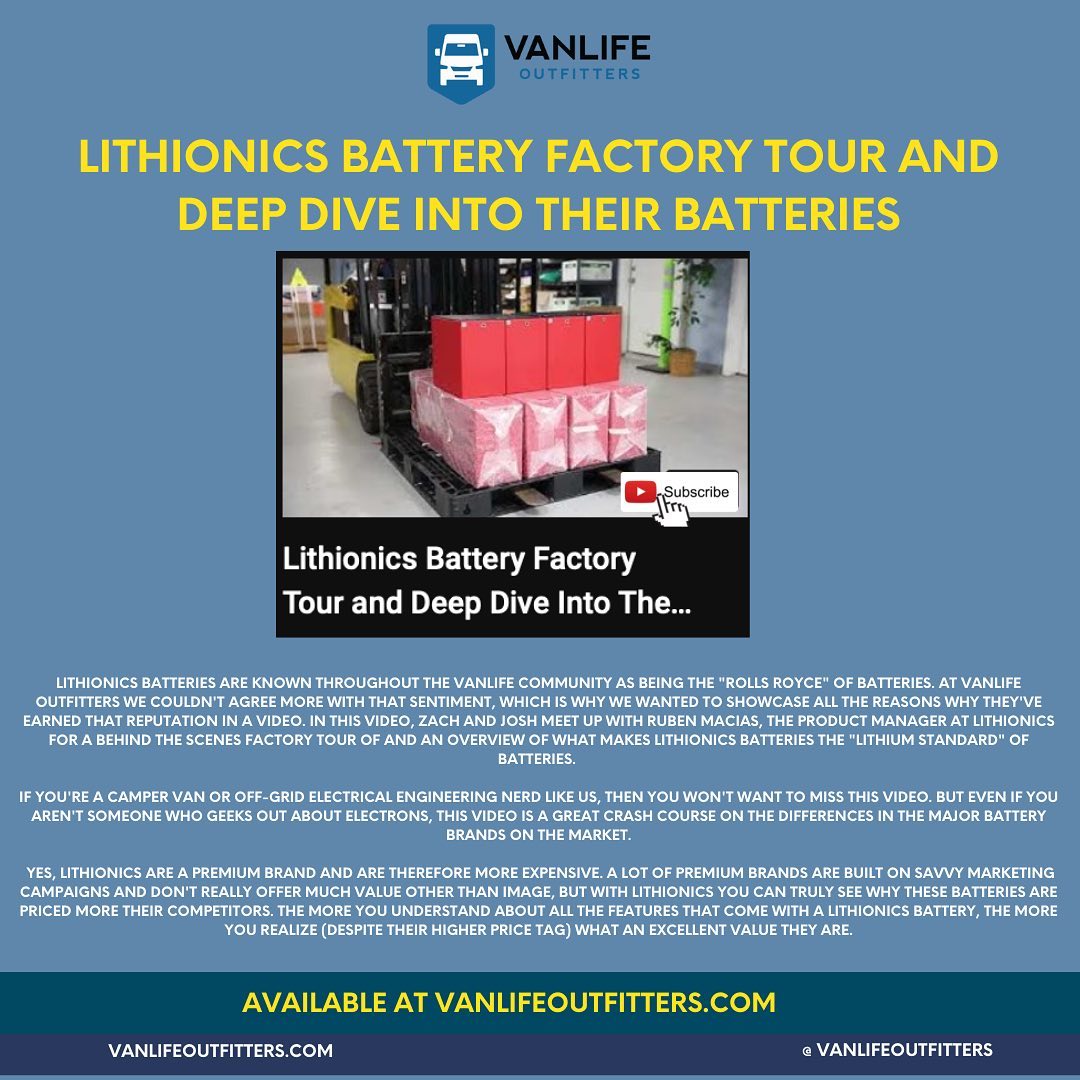 vanlifeoutfitters
•
Follow
Lithionics batteries are known throughout the vanlife community as being the "Rolls Royce" of batteries. At Vanlife Outfitters we couldn't agree more with that sentiment, which is why we wanted to showcase all the reasons why they've earned that reputation in a video. In this video, Zach and Josh meet up with Ruben Macias, the Product Manager at Lithionics for a behind the scenes factory tour of and an overview of what makes Lithionics batteries the "lithium standard" of batteries. If you're a camper van or off-grid electrical engineering nerd like us, then you won't want to miss this video. But even if you aren't someone who geeks out about electrons, this video is a great crash course on the differences in the major battery brands on the market. Yes, Lithionics are a premium brand and are therefore more expensive. A lot of premium brands are built on savvy marketing campaigns and don't really offer much value other than image, but with Lithionics you can truly see why these batteries are priced more their competitors. The more you understand about all the features that come with a Lithionics battery, the more you realize (despite their higher price tag) what an excellent value they are. Watch full video on Youtube. Link in bio! 📲 Follow👉 @vanlifeoutfitters 👈 for daily tips, inspiration, and all things Vanlife. Visit the link in our bio for essential and exclusive vanlife products including electric, insulation, flooring, cooling, and so much more. Link in bio. 🚐💨 To get features, use #Vanlifeoutfitters or tag us @vanlifeoutfitters 📲 • • - #vanlife #vanlifetravel #vanlifeexplorers #vanlifemotivation #vanlifediaries #vanlifers #vanlifeideas #vanlifemovement #homeonwheels #motorhome #vanlifer #homeiswhereyouparkit #buslife #campervan #vanlifestyle #rvliving #rvlifestyle #vanconversion #camperlifestyle #vanlifeing #vandwelling #vandweller #hippievan #vangoals #theprojectvanlife #vanvibes #vanliving #diycamper #projectvanlife
View on Instagram |
6/6
View on Instagram