How To Level Your Camper Van

Some of the most beautiful and rugged wilderness camp sites are the most unlevel and often that driveway you snagged at your friend or family’s house has a pretty significant slope. So, in this short post, I’ll explore a few options for leveling your camper van. It’s worth noting that some people simply don’t care if their van is unlevel. I wish I was like them! But, for me, leveling my rig is important to be able to sleep well.

Larger motor homes and trailers typically have some sort of leveling system included with the rig but, camper vans don’t so you have to bring something along.

Some folks swear by this method. They simply harvest rocks/etc. from the surrounding area, put them under the tires that need to be leveled and voila! The clear benefit to this approach is that it’s entirely free and you don’t need to carry anything with you so it doesn’t use any space inside your van. The obvious down side is that not every camp site is going to support this approach – particularly in urban areas. It’s also a lot harder than it seems to find just the right size objects for leveling and it can be a real hassle to drive onto some of these odd shaped things.

You can cut some wood (such as 2″ x 6″ lumber) into short sections (think tire-length strips) and then lay those onto the ground near the tires you need to level and drive up on them. In my view this is the worst option. First it takes up too much precious space in your tiny van. Then it gets really dicey when you need to stack more than one “layer” of boards to level a really wonky camping spot. However, this approach does work for some people and you may even have the scraps of wood laying around ready to repurpose this way.

The commonly used plastic leveling blocks are like oversized legos. They are 8.5″ x 8.5″ square and 1″ tall. The idea is that you build a sort of pyramid out of the blocks in front of the wheel(s) you need to level and then you drive onto this pyramid. When you’re done they (theoretically) stack up onto each other to stow away into a bag provided with the blocks. Until I discovered the Flat-Jack (more on that below), this was the actually the best option. They were the devil I knew but definitely a freaking devil. There are several things I hated issues with these things. First, camper vans are heavy and you’re using these on unlevel ground so, when you drive up onto them they twist and crack which means they only stack correctly for the first few uses. That makes them hard to set up because you’re trying to use the least damaged blocks on the bottom in order to build your pyramid of blocks. That initial problem is greatly exacerbated by the fact that it’s nearly impossible to drive onto these pyramids and then stop at the exact right space (remember only 8.5″ wide). You are basically juicing the accelerator to get up on the blocks while simultaneously slamming on your brakes. If you get that right – after ten attempts – there’s a good chance your van rolls slightly off when you put it into park! Each attempt to drive onto the blocks smashes them deeper into the ground which is often muddy or sandy while crushing their shape further. So, after you use these things, even a few times, they are so mangled and dirty, they don’t stack up anymore so they end up taking up way more space than they did when they stowed away fully stacked up. 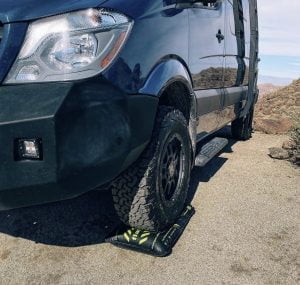 Cue the angelic music. After years of disappointing experiences with other leveling systems (see above), I discovered there was a thing called the Flat-Jack widely available in Europe but not available here in the USA. So, long story made short, we got in touch with the Flat-Jack folks and became the exclusive seller of these magic air leveling pillows in the US. So, I’m certainly biased, but I think the Flat-Jack is the way to go for camper van leveling.

As the name suggest, they store flat so they take up very little space in your van. I have mine stored in mesh pockets attached to my rear doors but they can be easily stashed away in so many places.

When you want to use them, you simply lay them on the ground in front of the tire(s) you want to level and then drive onto them. Because they’re flat, this is super simple – all that frustration trying to get up on sets of blocks (or rocks or wood or whatever) goes way. You just lay them on the ground and drive into place. Then you connect up an air compressor or hand pump and inflate to the desired height – all the way up to 4.75″. As you inflate, you can fine tune the leveling in a way that blocks/wood/rocks cannot begin to match.

The only real “con” is that they’re expensive. However, if you take into consideration how valuable space is inside a small van and how much frustration they will eliminate I think the value starts to shine through. And, unlike the leveling blocks that essentially self destruct as you use them, these will last a lifetime if you treat them well (don’t overinflate and protect from sharp objects).

We’ve only been selling them for a few months but we’ve already had very positive feedback from other vanlifers an we encourage you to check them out!

A Sassy Video Comparing Leveling Blocks To The Flat-Jack 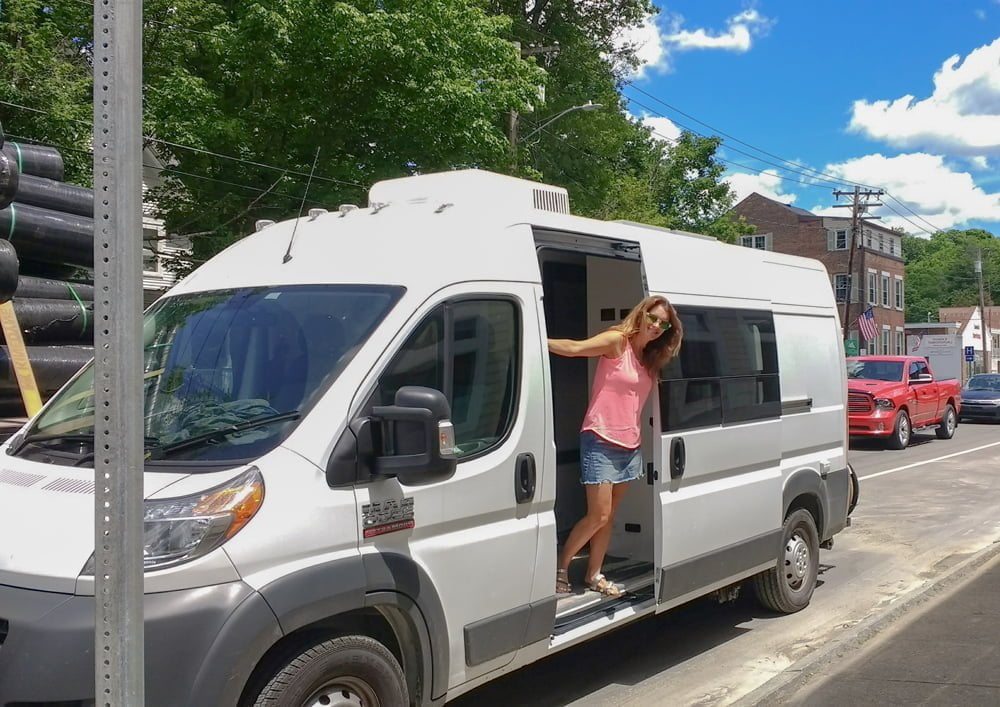